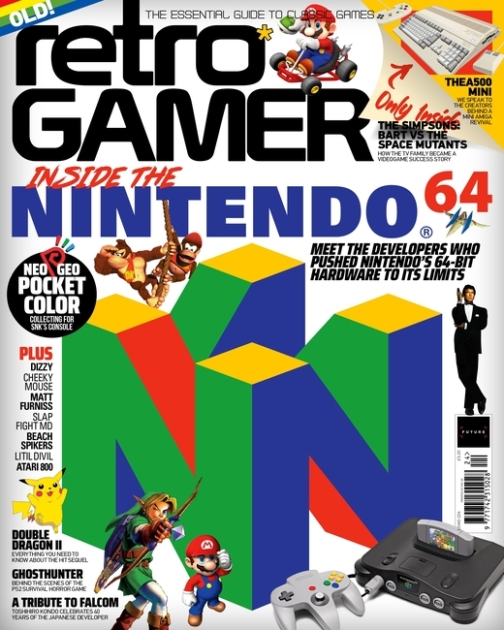 The latest issue of Retro Gamer is hitting shelves today, and we’re celebrating the 25 year old Nintendo 64 by taking a deep look at the hardware. To find out how the machine ticked at a technical level, we speak to developers who worked on great games including Super Mario 64, Banjo-Kazooie, 1080 Snowboarding, Diddy Kong Racing, Excitebike 64 and Star Wars Episode I: Racer.

Of course, that’s not all. Elsewhere in the issue we have a tribute to Falcom, the celebrated Japanese RPG developer that has just reached its 40th anniversary, as well as features on the creation of the PS2’s graphical marvel Ghosthunter, the surprisingly tough The Simpsons: Bart vs The Space Mutants and the CD-ROM showcase Litil Divil. You’ll also find an Ultimate Guide to Technos’ beat-’em-up sequel Double Dragon II: The Revenge, covering the arcade game with a look at all of the home conversions, plus a feature on the evolution of the ever-popular egg Dizzy. A guide to collecting games for SNK’s magnificent Neo Geo Pocket Color also awaits, as does our regular long interview – this time with videogame music veteran Matt Furniss.

You can pick up issue 224 of Retro Gamer in all good newsagents, or buy subscriptions and single issues from Magazines Direct.